skip to main | skip to sidebar

Somewhere a cardiologist got their wings

Last week a group of us had dinner and tasty if a bit snooty beers at Brasserie V.  One appetizer was almond-stuffed dates wrapped in bacon.  These were so good that it was decided the recipe should be reproduced at this week's Geeks' Night In.  So, along with the evening's bottling and brewing of beer, dates were stuffed, wrapped in bacon, skewered, lightly sprinkled with brown sugar and broiled.

Our version was also delicious.  My brilliant innovation came when I spied the loaf of French bread looking lonely on the table.  I ripped a hunk off, and dipped it into the date-flavored bacon fat left in the broiling pan.  Everyone else was appalled — including, I hasten to add, Chuck. Until they tried it.
Posted by Wm at 2/26/2008 No comments:

I should be studying...

Instead I did this: 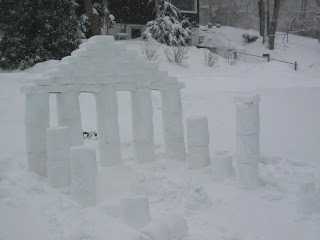 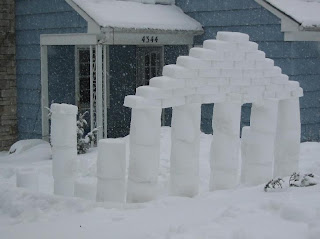 I had brief anxieties when the wind and the cold really started.  Branches were falling off neighbors' trees and my working area was right under some suspicious branches.  I was ready to bolt at the first hint of a crack above me.
Posted by Wm at 2/17/2008 6 comments:

It's the little things: Lisp + Unicode

This little snippet of code makes me giddy out of proportion to what it accomplishes:

That this is so easy is a lucky accident of Common Lisp's history. The "common" in Common Lisp is because it was supposed to unite several popular (hey, it was the 80s), but incompatible, Lisp variants. There were lots more kinds of computers in wide use in the 80s, and many different encoding schemes for text. Thus, Common Lisp strings were always arrays of characters which were not necessarily bytes, or even ASCII. EBCDIC, anyone?

Well, the betacode to unicode conversion library works. Next up, indexing Perseus' exotic XML texts.
Posted by Wm at 2/14/2008 No comments:

2) What's the point of a DTD, anyway, if you're just going to obliterate it when you think up something cleverer?

3) Anyone who thinks the modern world is "too coldly rational" isn't paying attention.
Posted by Wm at 2/04/2008 No comments: